Giant South African Leopard Tortoises have a very outgoing personality and are much less shy then the more common leopard.  The giants get slightly larger, with most reaching sizes of 13-16″ though some in rare cases have been reported larger.  We recommend our 6-month-old well started baby giant leopard tortoises for sale over the fragile hatchling giant south african leopard tortoise for sale.

Leopard torts get their name from the markings on its shell that resemble the large leopard cat of Africa with the same name. However, consider more than just the looks of this large tortoise before deciding to care for one, as it’s long-lived, requires a lot of space, and has some specific needs beings it is considered a. medium sized tortoise.

The leopard tortoise is the second largest tortoise native to Africa. Only the African spurred tortoise, (also known as the Sulcata tortoise for sale) is larger. Two subspecies are generally recognized. Stigmochelys pardalis babcocki is the most common species in the pet trade. It has a large natural range resulting in geographic variations in size, color and temperature tolerance. Stigmochelys pardalis pardalis is from South Africa and Namibia. S. pardalis pardalis can be distinguished from S. pardalis babcocki as it is generally darker in color, may not be as high domed and generally grows larger.

Without knowing the origin of a leopard tortoise, it is difficult to distinguish adults of the two species due to the geographic variations of S. p. babcocki. Hatchling tortoises of each species are generally distinguished based on the number of dark spots on each scute. S. p. babcocki generally have one black dot or no dots, while S. p. pardalis generally have two black dots on each scute.

Adult leopard tortoises measure from 10 to 18 inches long depending on the geographic origin and subspecies of the tortoise. The South African Leopard Tortoise subspecies, Stigmachelys pardalis pardalis, may grow to 24 inches and the giants from Ethiopia and Somalia may approach 30 inches. Females often grow larger than males, however depending on the origin of the specimen this may be reversed, or male and females may be of similar size. Due to wide geographic variations, there are no set standards to size. Male leopards may always be distinguished from females by their concaved plastron and longer tails.  Stigmachelys pardalis pardalis is less common in collections than Stigmachelys pardalis babcocki.

Leopard torts live between 50 and 100 years in the wild.

The carapace of the leopard is high and domed, sometimes with pyramid shaped scutes. Juvenile leopard tortoises and young leopard tort adults are attractively marked and the markings on each individual are unique. The skin and background color is cream to yellow, and the carapace is marked with black blotches, spots or even dashes or stripes. However, in mature adults, the markings tend to fade to a slaty, nondescript brown or grey, commonly tinged with the local dust.

Although some tortoise keepers supplement the diet with manufactured vitamins and vitamin D3, I have not found these necessary if the leopard torts are provided with a varied diet and exposed to UVB light. Hatchlings should be fed daily and may benefit from food that is lightly sprinkled with calcium powder several times a week.

A small portion of the leopard tortoise’s diet may include fruits, such as tomatoes, apples, papayas, cantaloupe, honeydew, watermelon, strawberries, raspberries, grapes, mangos and bananas. Fruit should be no more than about 5 percent of the overall diet.

For indoor care of the leo tortoise, temperatures should be maintained between 75 and 90 degrees, with a basking spot of 95 degrees. Depending on the indoor air temperatures, a heat light may be required at night or during the day for the tortoise to thermoregulate and raise its temperature to optimal levels for digestion. Exposure to natural sunlight or UVB light plays an important role in how the body absorbs and uses calcium. UVB light or natural sunlight allows the tortoise to produce vitamin D3.

Vitamin D3 is critical to the tortoise in its ability to absorb and use the available calcium. UVB can be obtained from fluorescent tubes specially made for reptile use or from mercury vapor bulbs, which also provide some heat. If fluorescent tubes are used for UVB, a separate light may be required for heat.

In outdoor enclosures, leopard tortoises may handle a wider range of temperatures, but once temperatures drop into the 50s at night or daily high temperatures fail to exceed 70 degrees, move tortoises indoors or provide heat. Heat may be provided with items such as ceramic heat emitters, infrared heat lights or “pig blankets” (a solid, flat piece of fiberglass with wire heating coils inside). 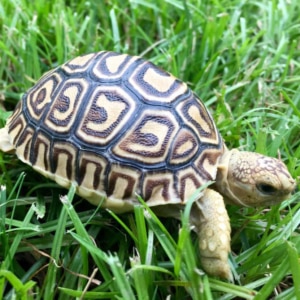 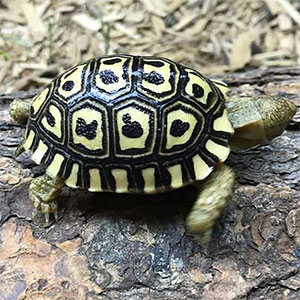 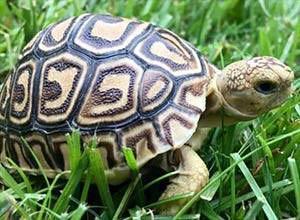 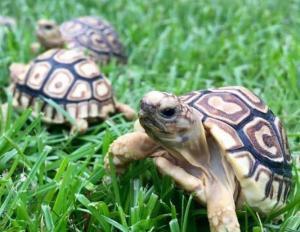 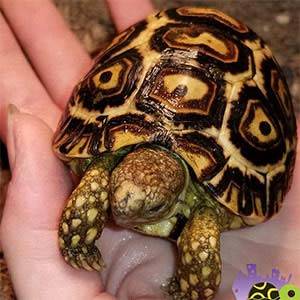 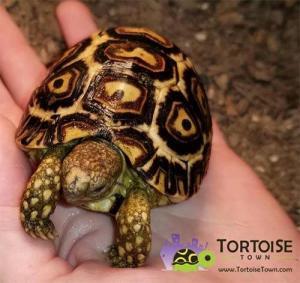