Introduction: North American box turtles are a common pet box turtle for sale. They are often sold as an easy-to-keep, problem-free pet that requires minimal care from their keeper. Although their care requirements are not as time consuming as that of a traditional pet like a dog, box turtles are a fairly simple pet to care for so long as you do your research on proper box turtle care.

Some specific requirements must be met for them to live well in captivity.  Before you purchase your turtle for sale, or box turtle for sale please read the following eastern box turtle for sale care information sheet.  They also have a long lifespan, and some have been documented to live for over 100 years in captivity. It’s important to consider both that their care requirements may be difficult to meet and that they have a long lifespan prior to purchasing a turtle. If the proper research is done before buying a box turtle and it is a well-planned decision, box turtles make great captives and are a pet that can be enjoyed for decades.

Explore our box turtle care section and find information on the following:

Box turtles that are offered for sale at most pet stores are wild-caught. Turtles that have recently been captured in the wild often have difficulty adapting to captive conditions, and the care they receive during their transportation between reptile dealers, retail pet stores, and their future keeper is rarely ideal. During this transitional period many turtles develop health problems, such as respiratory infections, eye infections, parasite problems, or simply dehydration. Most of the time these problems can be avoided by either purchasing captive-bred box turtles or by adopting a surrendered turtle from someone who no longer wants theirs. Captive-bred box turtles can be located online through reptile classifieds. They can also be located through specialty reptile dealers. Always purchase captive-bred box turtles over wild-caught ones.

Cage: A common overlooked aspect of box turtle care is cage size. In the wild, box turtles occupy relatively arge areas, and providing an enclosure that offers plenty of room is essential to permanently keep them in captivity. Outdoor turtle pens are the best way to accomplish this. They are not difficult to construct and are cheaper than setting up an indoor enclosure. When kept outside, box turtles are exposed to unfiltered sun light, including beneficial UVB rays, which are required for turtles to process calcium from their diet. See Building an Outdoor Box Turtle Pen for more information about constructing one.

Unfortunately, not every environment is suitable to house box turtles outdoors. In areas outside of their natural range, it may be necessary to bring the turtle inside during cold or hot weather, and in some regions, it might not be suitable to keep box turtles outside at all. In these situations, an enclosure indoors will be necessary.

Standard glass aquariums don’t work well for housing turtles. Many box turtles, particularly wild-caught animals, pace back and forth against the side of an aquarium trying to walk through the glass, which can be stressful for the turtle. Glass aquariums are also expensive, easily broken, and heavy, and are best passed up for other housing options. Large plastic tubs, such as cement mixing trays, large storage containers, or stock ponds, can be used. Some people have also had success keeping turtles in large indoor pens constructed out of wood, often on top of a table or raised legs. You keep can turtle in a 50 gallon tub that measures 43 inches long by 22 inches wide by 18 inches high (109 cm by 56 cm by 46 cm) during the winter and late fall. It cost less than $15 and offers more space than an average aquarium.

Box turtles do best when kept on a substrate that they can burrow in. In indoor enclosures, coconut husk fiber (bed-a-beast, eco earth, forest bed, etc.) is an ideal substrate. Large bark nuggets and sand can be mixed into the coconut husk fiber. Other possible substrates include cypress mulch, peat moss, or top soil mixed with sand. Gravel, newspaper, sand, reptile carpeting, and indoor/outdoor carpeting make poor substrates and do not work well long-term because turtles can not easily burrow in them, and they do not hold moisture well.
Most captive box turtles are fairly secretive and prefer to remain hidden during the day. To accommodate this, a few hide areas should be provided. These can include pieces of cork bark, commercially available reptile hide spots, driftwood, or cardboard shelters with an entrance hole cut in them.

Box turtles that are kept indoors need two types of lighting to stay healthy. They need to be exposed to UVB rays that are produced by a fluorescent or mercury vapor light bulb, and heat that is produced by an incandescent light bulb. Box turtles will need to receive UVB rays in order for their body to process calcium from their diet. Choose a bulb that produces at least “5%” UVB radiation. Place the UVB emitting light bulb over a screen section or open section of the cage because glass and plastic filter out UVB rays. The amount of UVB radiation that is produced by the currently available bulbs slowly decreases over time, so UVB emitting light bulbs need to be replaced every five to seven months regardless of if they burn out or not. Incandescent bulbs can be used to heat the cage to an appropriate temperature. Infra-red incandescent light bulbs can be used to heat the cage at night without disturbing the turtle. All lights should be turned on for 10 to 14 hours a day, with the exception of infra-red light bulbs.

The exact temperature that is right for a turtle depends on the species that is kept and where it is from. It’s important to have both a warm and a cool side in the cage so that the box turtle can regulate its body temperature. Box turtles from the northern end of their range may do better when kept cooler than box turtles from the southern part of their range. The warm side should have a warm spot provided by a low wattage light bulb that reaches 80°F-90°F (27°C-32°C). The cooler end of the cage should generally stay between 65°F-75°F (18°C-24°C). If the temperature falls too low for long periods of time some wild-caught box turtles may try to hibernate. If they aren’t conditioned before they start hibernating the turtle will run into health problems.

Eastern box turtles spend much of their time in the leaf litter of forests and woody grasslands. The humidity in the soil and leaf litter is often high. Ornate box turtles are generally found in drier prairies and partial forests where the humidity is lower. Half of a box turtle’s cage can be sprayed with water daily to create a humid area for the turtle to go. The bottom layer of soil substrate should remain moist or damp on one half of the cage as well. Box turtles that are kept in dry conditions often remain burrowed under the substrate for extended periods of time in an attempt to stay in a humid area.

A source of clean water should always be available to box turtles. Most bathe in it a couple times a day or more and it can become dirty quickly. The water dish should be changed at least once a day, more often if needed. Box turtles are also not the best swimmers, so the water dish should be fairly shallow. It should be large enough for the entire turtle to fit into it. To ensure that captive box turtles stay hydrated it can be helpful to soak them in lukewarm water for up to an hour once a week.

Both Eastern and ornate box turtles are omnivores. Eastern box turtles should be provided with a diet that consists of around 60-70% plant matter, while ornate box turtles should be fed less plant matter and more animal based foods. A basic box turtle salad can consist of chopped mustard greens, collard greens, turnip greens, dandelion greens and romaine lettuce. Other interesting fruits and vegetables should be mixed in with the greens at every feeding. Good fruits and other vegetables to try feeding are apples, pears, grapes, blueberries, strawberries, raspberries, blackberries, cherries, mangos, bananas, zucchini, squash, carrots, sweet potato, and pea pods. Spinach, beets, rhubarb, broccoli, cauliflower and kale should only be fed occasionally or avoided altogether because they contain large amounts of oxalic acids or iodine binders which limit the amount of calcium that a turtle can use. Some box turtles may refuse to eat leafy greens, which is fine, provided that their diet is varied and supplemented correctly.
It’s important to chop up the fruits and vegetables well before offering them to a turtle. Box turtles often develop strong preferences for certain food items and may avoid eating the ones that they don’t like if the salad isn’t chopped and mixed together. Feeding only one or two types of vegetables or fruits, or only a box turtle’s favorite food, will inevitably lead to nutritional deficiencies or imbalances.
Animal based foods can consist mostly of live invertebrates like crickets, earth worms, night crawlers, wax worms, super worms, silk worms, horn worms, and meal worms. Out of that list, crickets should be fed more often than other feeder insects.

Occasionally, box turtles can be offered small pre-killed pinky or fuzzy mice or boiled chicken. Low-fat canned dog or cat food mixed with a high quality vitamin and calcium supplement can be fed once every few weeks in addition to live invertebrates and occasional mice or poultry.
Eastern box turtles should be offered vegetables and fruits everyday or every other day and insects and other invertebrates once or twice a week. Ornate box turtles can be offered insects two or three times a week and vegetables and fruits every other day. Make sure to remove old, uneaten food once the box turtle looses interest in it. Commercial diets and pellets can be offered along with a raw diet, but generally aren’t as well-rounded as they claim to be and should not be the only food offered. Use high quality reptile vitamin and mineral supplements once every few feedings for adults, more often for juvenile turtles.

The ornate box turtle (Terrapene ornata ornata) is one of only two terrestrial species of turtles native to the Great Plains of the United States. It is one of the two different subspecies of Terrapene ornata. It is the state reptile of Kansas. It is a relatively small turtle, that is currently listed as threatened in Illinois, but is of concern and protected in six Midwestern states (Colorado, Iowa, Indiana, Nebraska, Kansas, and Wisconsin).  Males and females generally look alike but males are often smaller; there is color variation with yellow lines from the center of the shell to the edges through gray, red-brown, or black coloration.  Besides the size, males can be distinguished from females in several ways; a large curved inner claw on the back feet, a cloacal opening that is farther back in males, a longer and thicker tail, and reddish color on the legs and occasionally on the jaw

We have some beautiful, hatchling, super active 6 month old well started baby ornate box turtles, yearling and juvenile ornate box turtles for sale.  Once past the fragile hatchling stage, these guys are very easy to care for, and super cute!  Ornate box turtles make great pet box turtles and are extremely colorful.  Our ornate box turtles are top quality with vivid color and ship via UPS or FedEx overnight in an insulated box with heat packs as needed.  One shipping price covers up to 4 turtles or tortoises. 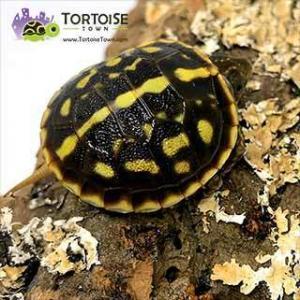 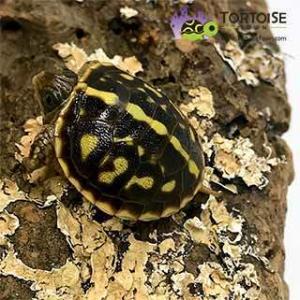 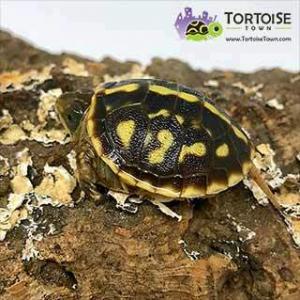 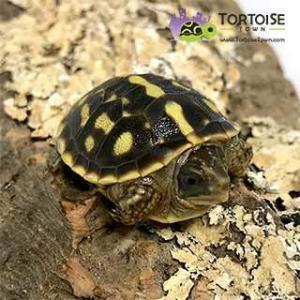 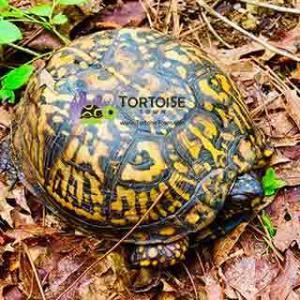 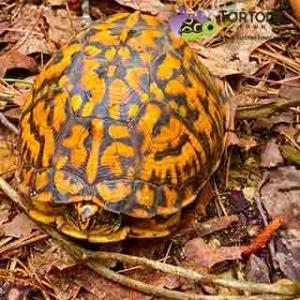 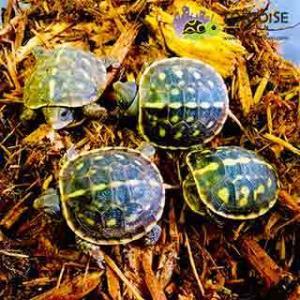 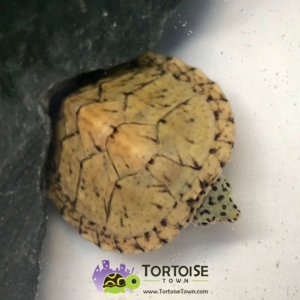