The Burmese Star tortoise is also known as the crown jewel of star tortoises for sale.  This is for good reason due to their beauty and rareness.  Burmese Star tortoises are absolutely beautiful creatures that re as stunning as they are docile.  The rare Burmese star tortoise for sale is one of the most beautiful tortoises in any tortoise keepers collection.  Fortunately, through captive breeding, their numbers have quickly risen from near extinction to more common albeit in the captive breeding world.  Burms have an oval-shaped carapace (upper shell) measuring 26 cm.  The color pattern is characterized by a highly distinctive star or radiating pattern.

The dark brown to black, domed carapace is marked with up to six radiating yellow stripes.  These stripes emerge from small, yellow central areas, creating a star pattern.   It is this beautiful highly contrasting pattern that gives the Burmese star tortoise its unique appearance. The underside or plastron is yellow with each scute having a dark brown or black blotch. A Burmese head is of moderate size with a non-projecting snout and a 3 point upper jaw. Skin color of the head, limbs, and tail are yellow to tan. Forelimbs of the Burmese star tortoise have large rounded scales and a large.  Also, scales appear at the end of the tail as well. Males are distinguished from the females by a much thicker and longer tail.  Baby Burmese star tortoise for sale is one of the crown jewels of all baby tortoise for sale.

Found in forest openings and forest edges in the dry zones of Myanmar.

The species feeds on a range of vegetation, primarily grass but also mushrooms, fruit, some insects, and larvae. In captivity, we feed them a diet of Mazuri tortoise chow and a wide range of greens high in calcium including Dandelion, Collard, Mustard Greens as well as other tortoise safe grasses and weeds as well as timothy hay.

Burmese Star Tortoise Threats to Survival in the wild

Although subsistence gathering of these tortoises has been going on for many generations, more recently they have undergone a dramatic decline.  Because of mass harvesting for the food market (for its perceived medical value), and the illegal pet trade. Also, because of the torts beauty, rarity, and distinctive markings on its carapace.  Unfortunately, large sums are being paid by collectors in Europe and North America.  Some attempt is being made to preserve the species in 2 protected areas.  However, poaching is rampant even though they are fully protected by law. Also, deforestation is a major hindrance in preserving the beautiful Burmese star tortoise for sale.

This species of tortoise has never been at a high abundance level such as Indian star, Sulcata, Red Foot and Russian tortoises.  However, in recent years, dedicated keepers are having success. Yearly, captively bred hatchling and juvenile Burmese star tortoises can be found for sale from experienced breeders.  Also, occasionally but still quite rare, adults will be offered. Regardless of age, Burmese tortoises fetch a high price and are considered to be very valuable. Their extinction-like situation in the wild only adds to their value making them irresistible to the serious tortoise enthusiast. Not to mention their gorgeous appearance.

Geochelone platynota are like most tortoise species, considered to be long-lived. There is very little information concerning this matter.  Most likely, this is partly due to the species’ lack of experience in human care. With its adaptive nature, the Burmese star should reveal more about its longevity in at least captivity in years to come.  At this point we expect them to live 60-100 years on average.

Burmese Stars are some of the most beautiful of all the Star Tortoise family.

While they are not a cheap tortoise for sale by any stretch of the imagination, they are some of the most rewarding animals to keep of all in the tortoise kingdom.  Some of the information contained above has been used with permission and greatly appreciated! from Chris Leone of Garden State Tortoise.

A stunning display of yellow, flower-petal-like striations appear on each scute, and when viewed from above, the carapace exhibits a netted, somewhat symmetrical pattern. Geochelone platynota is considered a star tortoise because the carapace design resembles that of the common Indian star tortoise (G. elegans). The Burmese was once considered to be a subspecies of the Indian, but has since been elevated to full species rank. It can be differentiated from the Indian by comparing the markings of both the carapace and plastron.

Burmese typically feature six points to the striation on each scute (although the first vertebral scute may have only five points, and the first coastal scute on each side may number more than six). The net-like pattern on the carapace is a result of the points of each striation joining at the scute seams. In contrast, G. elegans has a higher-domed carapace with striations that have more than six points on each scute. These points or rays increase in number as a tortoise grows, eventually resembling lines more than flower petals.

The large, predominantly yellow head and limbs of the Burmese star can also help set it apart from the Indian, which has a smaller head with yellow and black markings that continue throughout the limbs and soft parts of the body.

On the plastron, the Burmese star tortoise displays a yellow ground color with darker triangular areas. These markings point toward one another along the mid-seam. Faint lines resembling a brushing effect of additional dark pigment may also be present. On the Indian, the star-like pattern on the carapace continues onto the plastron, but usually with wider rays forming a sunburst or pinwheel representation on each scute.

Both species can attain impressive sizes, but the Burmese Star can take the cake when it comes to size. Females are typically larger, surpassing 12 inches regularly, and even reaching more than 14 inches, but males can come close or get just as big. Size is much more variable for the Indian, with island specimens reaching 12 inches (these are commonly referred to as the Sri Lankan star tortoises, which are not a separate subspecies) and mainland ones being much smaller or nearly as large in certain geographical areas. The largest Indian star in our collection is 9½ inches fully grown, while the largest Burmese star we have is 13 inches and still growing.

Burmese star tortoises are hefty animals able to eat large amounts as they graze and browse. We have noted that they become active early in the morning, but even more so in the evening. It’s surprising how they can be almost nocturnal in a sense. They leave their hiding areas at dusk and graze for quite some time before turning in after nightfall.

For this reason, we typically offer our adults food late in the afternoon. The young are more active in the morning, so they are fed shortly after the lights are turned on in the morning. Dandelion, chicory, clover, mulberry leaves, hibiscus flowers, squash, cactus pads and pear, kale, escarole, collard greens and radicchio are offered regularly to both juveniles and adults. We also make a mix comprised of Mazuri Tortoise Diet (original formula) and Zoo Med Grassland Tortoise Diet, which is voraciously devoured by both adults young. 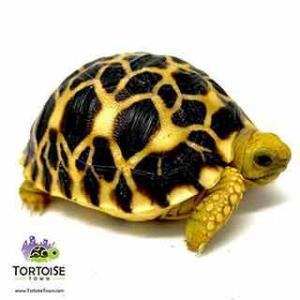 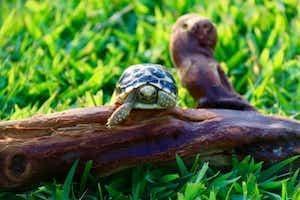 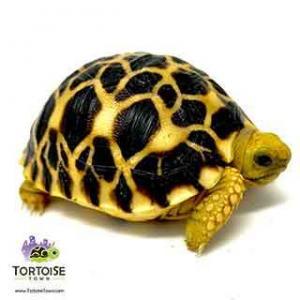 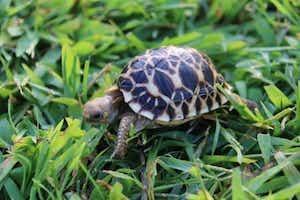 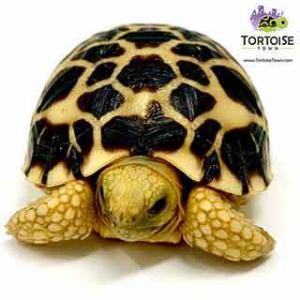 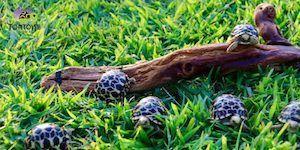 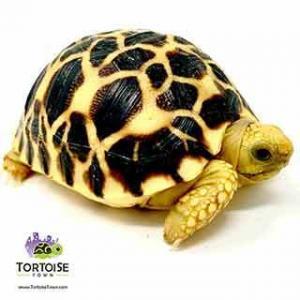 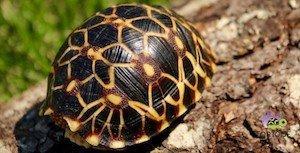 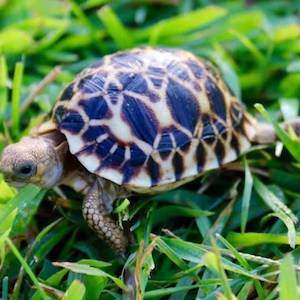 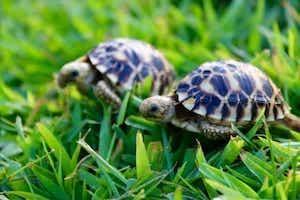 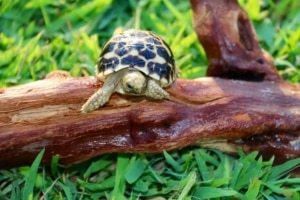 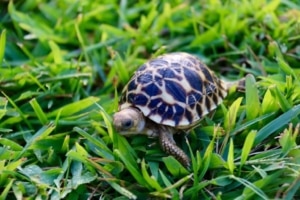