We have some beautiful, active and healthy captive bred REAL baby giant south african leopard tortoise for sale.  We do recommend the well started giant leopard tortoise babies (available here) over the fragile fresh hatchlings for those with less experience as they’re even more active and easier to care for then the hatchling stage. They do well on Mazuri tortoise chow, opuntia cactus and a variety of mixed greens and grasses with a dusting of calcium supplement all available at Tortoise Town.  We pride ourselves on selling only top notch tortoises, ready to ship to you via FedEx Overnight in heated insulated boxes.  One shipping charge covers up to 3 tortoises.

Diet consists of a wide variety of high-quality greens and some veggies.  Here at the tortoise farm, we prepare out “chopped tortoise salad” 5 days a week.  We supplement the salad with additional nuggets of soaked and softened tortoise chow.  Our salad is composed of equal parts of chopped Romaine, Collard, Mustard Greens, Raddichio, Spring Mix, Endive, Squash, Shredded carrots, and the occasional chopped tomato or two.  It is important to chop these and mix them all together.  We prepare our carrots by putting them into a mixer and shredding them and just mixing them with our salad.  All of our baby tortoise for sale as well as adult tortoises get the same food here at the farm.

Humidity is an interesting topic concerning both baby leopard tortoise as well as juvenile and adults.  Years ago it was believed that using a dryer setup and less humid climate was important for successfully keeping leopard tortoises.  Now, the thought has changed completely.  We are now using high humid-low air movement setups to achieve the greatest amount of success and growth with our baby Giant leopard tortoises.  Keeping your humidity in the range of 70-75% is key to having a smooth-shelled, healthy tortoise.  Some ways to maintain humidity range anywhere from having a deep substrate of 4″ and spraying it down each morning, to using a reptile fogger.

UVB lighting is extremely important to growing your tortoise from a fragile hatchling to a large, healthy adult.  Arcadia brand tortoise UVB lamps are best, however, you may also use a reptisun.  Using a 10% or 10.0 lamp is ok, however a 12% or 12.0 lamp is recommended for juvenile thru adult Giant South African leopard tortoises for sale.  UVB lamps are key to proper growth and vitamin d absorption.  During winter months, those who keep their tortoises indoors use a heavier feeding of Mazuri tortoise chow to help supplement the lack of Vitamin D3 since they are not in the outdoor sunshine.

Leopard tortoises are long-lived animals.  A typical baby leopard tortoise can grow to live up to 150 years!  While there is no actual record of how long does a leopard tortoise live, many believe they will reach ripe old ages over 100 years!  Caring for your new baby tortoise can reward you for a lifetime! Also, sometimes people will “will” or “leave” their tortoises to their own children or grandchildren if they become too old to care for their pet tortoise for sale.

Temperature for both the East African leopard tortoise (pardalis babcocki) and the Giant South African leopard tortoise (Pardalis Pardalis) is the same.  While some do think Pardalis Pardalis has a higher heat and lower cold tolerance, general care remains the same between both subspecies.  Leopard tortoises for sale enjoy ambient temperatures in the neighborhood of 85 degrees.  Hot spots should be provided and kept in the range of 92-96 degrees.  Coldest areas in the entire habitat should be in the 75-78 degree range, with nighttime lows staying about 65 degrees even for adults.  When soaking your tortoise use water that is around 86 degrees and warm to touch.

Soaking your baby Giant South African leopard tortoise for sale daily is important.  Each morning, soak your baby in warm 86-87 degree water, that is very shallow.  Be very careful not to drown your new pet tortoise!

Be very careful when choosing your giant south african leopard tortoise for sale, as MOST sites on the internet are selling REGULAR pardalis babcocki leopard tortoises and saying they are giants.  The giants are not only bigger, they are known for being are a bit more outgoing and personable than a normal leopard and also have a marbled spotted pattern on their head and body, setting them apart from the traditional sub species. 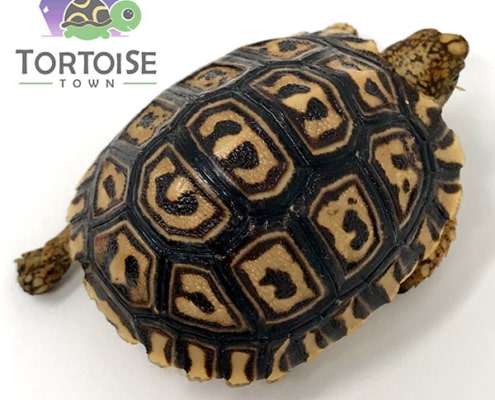 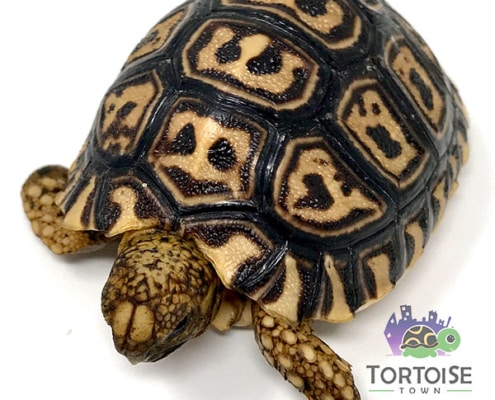 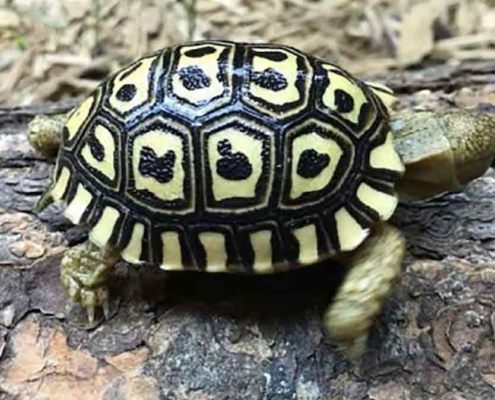 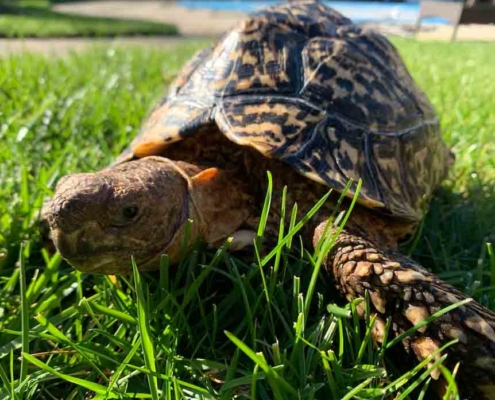 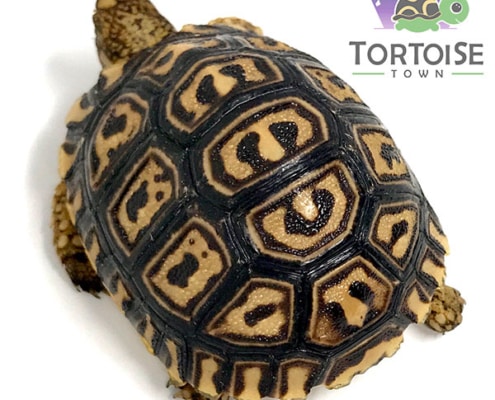 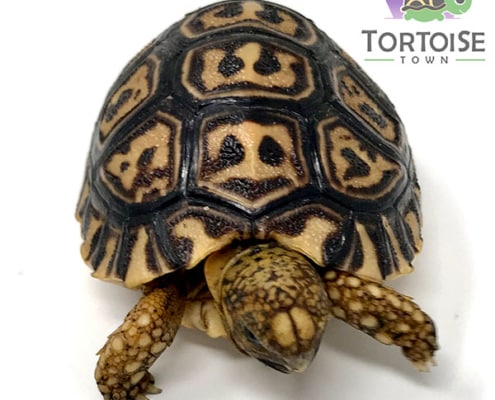 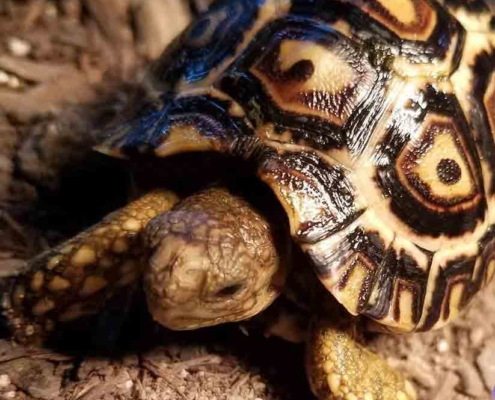 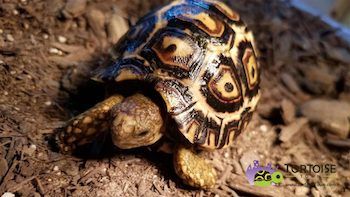