Tortoise town is your source for the nicest captive bred golden greek tortoises for sale anywhere!

Greek tortoises are amazing small to medium sized species.  They reside in Europe, though some of their habitat has been destroyed by human population.  Here at Tortoise Town, we breed both the Ibera Greek tortoise for sale, as well as the Golden Greek.

Iberas have a darker pattern and more color contrast.  Ibera Greeks are outgoing and not shy.  They can make for great additions to any tortoise collection.  Iberas resemble the Hermann’s tortoise for sale more so than any other species in the Testudo tortoise family.

Golden Greeks are lighter in color and a tad bit smaller.  The personality of the Golden vs Ibera is distinctly different.  Goldens seem shy, even into adult hood, where Ibera are much more sure of themselves and out going.  Feeding an Ibera greek by hand for example is much easier than getting a baby Golden Greek tortoise for sale to eat from your hand.  Overall the Golden is a bit smaller and shyer, and makes for less of a “pet tortoise for sale” than the Iberian cousin.

Golden Greek tortoise for sale are a fairly recent addition to herpetoculture. Before they entered the U.S. reptile market in significant numbers, the typical Greek tortoise available from importers was heavily patterned, and it often had a dark shell and skin. These varied considerably in size, 4 to 8 inches in straight line plastron length, and to a lesser degree in shell shape depending on the country of origin. But to the average tortoise keeper, the various Middle Eastern races of Greek tortoises were otherwise all rather similar looking.

Testudo Graeca is the more common of the main 3 greek tortoises for sale.

General appearance: The coloration of the baby golden greek tortoise is highly variable and can range from olive with dark spots in the middle of each scute on the carapace to a “golden” form which is almost entirely yellow in appearance.

Golden Greek Tortoises for sale can be an Indoor Tortoise

Golden Greek tortoises for sale require slightly different housing and care conditions than the more common Greek tortoises. They come from hot, dry regions and do not tolerate high humidity or cool temperatures well. Also, constant exposure to morning dew on the grass can lead to plastron shell-rot issues.

In most regions of the U.S. they require indoor housing. At the very least, most must be brought indoors at night year round and maintained indoors continually during the cooler months.

The best enclosure for tortoises is an open “turtle table” of approximately 4 feet long by 2 feet wide by 1 to 2 feet deep for an adult Greek Tortoise though the bigger the better. Often preformed plastic garden ponds can be easily converted for this task. Aquariums are not recommended for tortoises as they do not allow proper air circulation. Very large screen enclosures such as a “Reptarium” may also be adequate.

Strictly herbivores, golden Greeks generally won’t seek out or consume animal-derived proteins. The ideal diet consists of edible weeds, such as dandelion and plantains, and live grasses, such as Bermuda and Timothy. If you’re restricted to foods available from the local grocery store, a daily offering of dampened mixed leafy greens, such as endive, bok choy, romaine and various loose-leaf-type lettuces, make a good base diet. Opuntia cactus pads, fruit, raw shredded squash and chopped peppers are excellent additions

Temperatures can be maintained by using incandescent basking bulbs, infrared heat bulbs or ceramic emitters. As with most species of tortoises UVA and UVB light sources need to be provided. This can be achieved with specialized fluorescent bulbs. Many have had great success with newer mercury vapor bulbs which provide both heat and UVA and UVB light in one bulb that fits into a standard incandescent fixture.

UVB 10.0 or 10% bulbs are recommended and depending on wattage should be placed anywhere from 12 to 24 inches from the substrate.  Higher percentage UVB can be used but must be placed even further from top of shell / substrate.  After receiving your greek tortoise for sale, it is essential to understand proper light, heat, and feeding requirements.

A variety of substrates can be used for your new pet greek tortoise for sale. We recommend terrarium moss be used for baby greek tortoises and greek tortoises under 8 months of age to create a humid hide which also is heated in the evenings so that your tortoise can get the hydration it needs for proper shell growth and overall development.

Environment: This is a terrestrial species which prefers a reasonably dry climate once grown. A suitable place to hide should also be provided. Such hiding places can be constructed from rocks or using half logs, available here.

The greek tortoise is strictly herbivorous. They require a high fiber, low protein and calcium rich diet. Dark leafy greens such as kale, dandelion, mustard, collard and turnip greens should be fed regularly, and spring mix can be fed up to 3-4 days per week. Natural grasses and hays can also be provided. High protein foods such as commercially prepared dog and cat food and beans should be avoided at all costs since this will eventually cause renal failure due to the excessive protein. Fruits should be avoided.

The calcium supplement, the turtle bone of the cuttle fish bone can also be used and is available here. Also as an alternative a light dusting of a calcium supplement can be added to the greens twice a week.  Fresh water should be offered at all times in a shallow dish. Your tortoise will also appreciate a 10-minute soak in a shallow bath water to ensure proper hydration.  Think the golden greek tortoise is the right baby tortoise for you?  Buy golden greek tortoise hatchlings for sale here.

Be sure to check out our extensive Greek tortoise care pages, that focus on the following important topics for raising a healthy baby Greek tortoise: 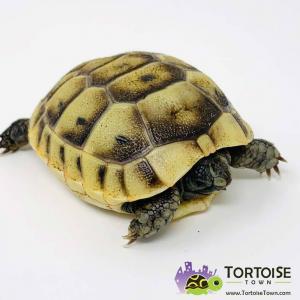 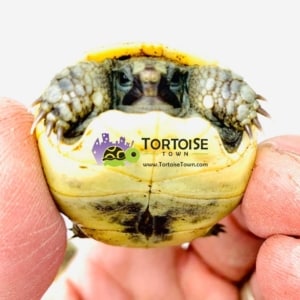 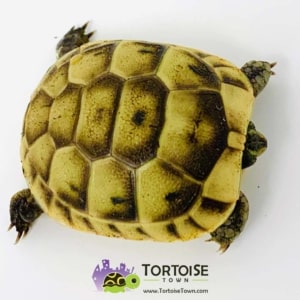 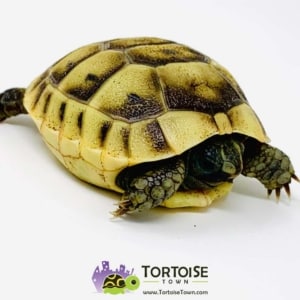 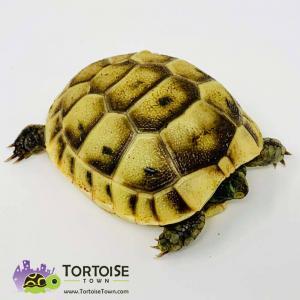 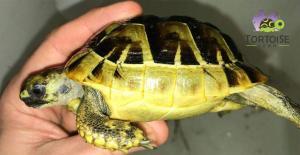 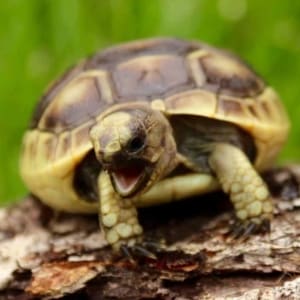 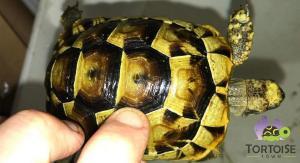