The eastern box turtle is known to appreciate a moderately moist forest floor with good drainage. Bottomland forest seems to be more popular than ridges and hillsides.

Sometimes eastern box turtles are encountered in non-forested areas, such as grasslands and pastures. Just as in the forests, the turtles want the floor to be moderately moist in these environments and seek out areas with wet leaves or wet dirt.

What does an Eastern Box Turtle eat?

Eastern box turtles for sale are opportunistic omnivores that will eat both animal and plant matter. They are known to eat a lot of different things, including fruits, berries, mushrooms, flowers, grasses, etc. They can catch prey but will happily eat carrion as well. In the wild, they catch suitably sized animals such as snails, worms, slugs, and beetles. If opportunity presents itself they will happily go after bigger prey as well, e.g. birds caught in nets.

The eastern box turtle lives in the eastern United States, from eastern Kansas, Oklahoma and Texas to the Atlantic Ocean. They are found all the way from southern Florida in the south to southern Main and the southern and eastern parts of the Michigan Upper Peninsula in the north. They are present in the Great Lakes region, but they are rare there and typically limited to areas far away from busy roads.

(How old can an eastern box turtle get?)

What to feed eastern box turtles for sale?

Before you buy your new baby eastern box turtle for sale online and have him shipped, make sure you have food readily available.  Take a look at the natural diet of the eastern box turtle and try to give it similar foods in captivity. Of course, one does not have to be super-strict. For instance, wild eastern box turtles are unlikely to encounter kiwi fruit since that fruit is native to another part of the word, but they will still do nicely on a diet that contains kiwi in captivity since they are generalized fruit-eaters in the wild.

As a rule of thumb, give your eastern box turtle roughly 50% protein-rich food (such as worms, beetles, grasshoppers, etc), 10% dark leafy greens and 40% vegetables, fruits and mushrooms.  We also feed Mazuri tortoise chow to our Eastern box turtles for sale, and they love it!

Water should always be available for the turtle, not just to drink but to soak in as well.

Searching for new baby turtles for sale? Be sure to check out our baby turtle for sale page!

While box turtles are not aquatic, it is not unusual for them to wade into shallow water to drink and have a soak. Make sure a shallow pan of water is readily accessible (and kept clean) at all times. On hot, dry days, run a sprinkler or mist their pen for added moisture.

If kept in an outdoor pen, make sure there are both sunny and shady areas available (the turtle should be able to move from cooler to warmer areas as necessary).

Indoors, a terrarium will need a heat source as well as a UVB emitting reptile light. Provide a basking spot with temperatures of 85 to 88 F, maintaining the terrarium with a gradient down to about 75 F. The nighttime temperature should not drop below 70 F. 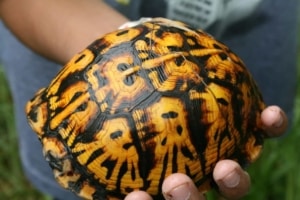 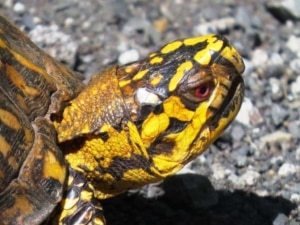 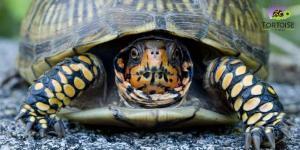 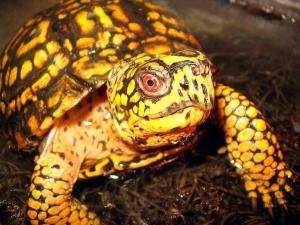