The pancake tortoise (Malacochersus tornieri) is found in rocky scrub in southern Kenya and northern and eastern Tanzania. Its name comes from the shape of its shell, which is flattened and flexible. Unlike most tortoises, which pull their limbs into their shell when threatened, the pancake runs for cover. It’s thought to be the fastest tortoise species alive!  If you’re looking for a pancake tortoise for sale, keep in mind they are super rare but we do have pancake tortoises for sale here.

A relatively small species, the upper shell (carapace) reaches a maximum length of 17.8 cm (7 inches). They live in loose groups around piles of rock, and their unique shape enables them to hide in the crevices in these rocks when trouble threatens. They also use these crevices to regulate their body temperature during the heat of the African day; in fact, although they don’t hibernate they do aestivate – which is the same thing, but to escape heat rather than cold.
Wild populations are in decline due to the deadly combination of habitat loss and collection for the pet trade; it’s more important than ever to make sure that you only buy true captive bred specimens. These should be microchipped and accompanied by the relevant Article 10 paperwork.

Pancakes are one of the few arid habitat tortoises that thrive in vivariums, although a well set-up tortoise table would be fine for them as well. They need a good source of UVB and a basking area large enough for them to expose their whole shells to the hotspot, rather than just a small area. They are also happy to live in groups, unlike many other species.

Feeding is relatively simple for them as long as you follow a few common sense rules. They do very well on a weed based diet, high in fiber and calcium, low in protein and phosphorous. Avoid fruit, and any greens high in oxalic acid (such as spinach) or goitrogens – chemicals that cause gout (most of the brassica family, cabbages, kale and so on). These food items are fine as a treat, but should be avoided on a regular basis. Plain calcium should be dusted on every feed, with a good quality multivitamin/multimineral powder added twice a week. Pancake tortoises feed enthusiastically, and seem to prefer to eat in the morning; they like to spend most of the day tucked up in their hides, but once they’re settled they will emerge to investigate whenever anyone comes near their home.

A word of warning – pancake tortoises are phenomenal climbers! They are adapted to spend their days scrambling around huge piles of sun-warmed rock, so any open-topped enclosure must have either a large overhanging lip or a mesh cover. Their flexible shell and long limbs allow them to flip themselves over much faster than more normal shaped species, another adaptation to help them cope with the inevitable falls that come with their acrobatic lifestyle.

Because of their unique shape, female pancakes lay one – or very occasionally two – eggs at a time, although they can do this up to five times in a season. They have an extremely variable incubation period; three to six months!  If you are looking for a baby pancake tortoise, check out our pancake tortoises for sale here. 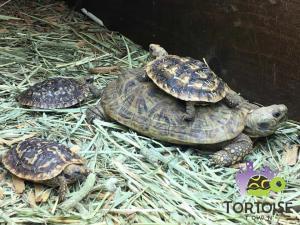 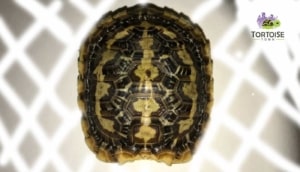 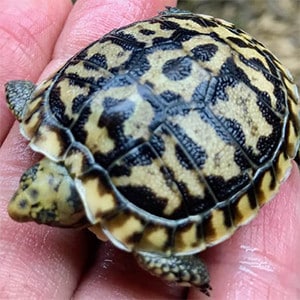 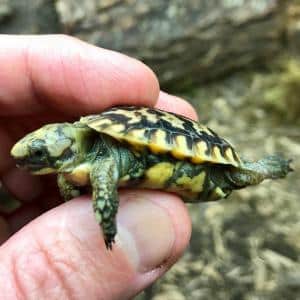